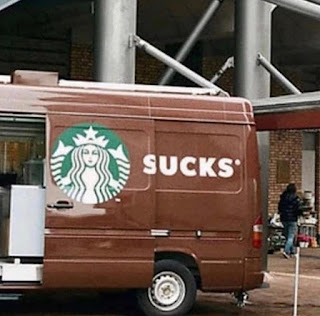 I read recently that most Simon owned malls have removed their customer service desks over the past year. I worked in a Simon mall for years, and was reminded of an asshole customer story, again from the Big Coffee Shop that I worked for.

Since we were in the mall, the majority of our regulars were people who also worked in the mall. One day, this guy started coming to the shop. He'd order a venti latte, extra hot, with mint syrup. Not even a mocha, this maniac was drinking hot mint milk with coffee in it. He would go, drink a bit of the drink, and then bring it back to us, complaining that it wasn't hot enough, or there wasn't enough mint syrup in it.

He came in nearly every day for weeks, doing the same thing: order the drink, drink a little, bring it back and load it down with syrup and HOT HOT milk. Most of my fellow baristas would remake the drink, and LOAD the damn thing with syrup. Other baristas would follow the recipe (which I believe a large only got 5 shots of syrup, I don't remember).

He eventually started to get smug about it with the baristas who weren't on his side. He would mosey on up to the counter, and order a "two hundred degree mint latte with 21 shots of mint syrup". And when he'd order like that, he was charged for every bit of his extra syrup. So, his price on drinks was also never consistent, which was something I couldn't do anything about. All baristas had favorite customers, and for all I knew, at least one of my team was giving him things and not charging him.

He was furious every time I was working, because I would charge him for everything. He finally asked me one day, "why do you charge me more than everyone else does? I want to speak to your supervisor." He was even more furious to find out that ya girl was also the supervisor.

He spoke to my manager, and they gave him the same answer that I did (you want a 21 gun syrup salute, you pay for it). He finally stopped coming to the store when I was working. Me and my coworkers would be DELIGHTED to see him not stop, and just keep trucking past the shop.

A few weeks later, one of the girls came over from the mall office, to get a cup of coffee, but also to drop off a letter they had received in the mall office for us. She kind of chuckled when she handed it to me, and told me to give it a read if I wanted to laugh.

Do you know this hot minty fuck wrote a letter to mall management about my attitude? I was standing there, reading this guy's diatribe, about how me and two other people he named would never wait on him, and if we did, we wouldn't make his drink properly.

This salty fucker wrote a whole ass letter to the mall, all because he didn't want to pay an extra $1.50 for the half of a bottle of syrup that he used on every visit.

What exactly did he think the mall was going to do about it? Send their mall cop over, put me in Mall Jail for doing my job? Had the guy not been an asshole, I wouldn't have been an asshole back to him. Period.

A second store opened nearby, so he announced to everyone that he'd be going to that store, where they would make him his cup of burnt, molten mint horseshit and only charge him $4 for it.

I made sure to call the manager at the new store (who was my old manager and a good friend), and gave him the lowdown on my buddy. They also charged him full price for everything. 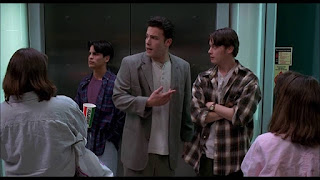 I'm reminded of one of my favorite scenes from Mallrats, where TS is talking to Shannon outside of the elevator.

T.S. Quint:
Haven't you ever heard the phrase "The customer is always right?"

Shannon Hamilton:
Let me tell you something. Let me give you a little secret, okay.

Shannon Hamilton:
The customer is always an asshole